Following his long and very public battle with cancer, drummer-bandleader-educator and record label producer Ralph Peterson, Jr. joined the ancestors in the early morning hours of Monday, March 1.  For our June 2019 DC JazzFest concluding weekend at The Wharf, to celebrate the Art Blakey centennial we presented Ralph Peterson’s Gen-Next Big Band, a vibrant assemblage of his top students at Berklee College of Music.  That particularly unit which twice recorded for Ralph’s Onyx label, including this 2019 edition: 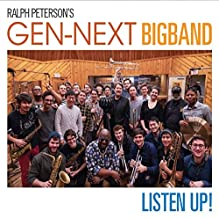 On that 2019 DC Jazz Festival occasion, as part of our Meet the Artist series of activities I hosted a live DownBeat magazine Blindfold Test, which was subsequently published in DB.  Thanks to DB publisher Frank Alkyer for granting permission to re-print this Ralph Peterson Blindfold Test in the Independent Ear. 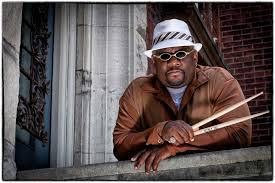 Drummer-bandleader and Berklee College of Music professor Ralph Peterson has raised the Art Blakey Jazz Messengers flag high in this centennial year of the great Pittsburgh-born drummer’s birth. Back in Buhaina’s final decades on the planet, whenever he had a big band project or needed a second drummer to rehearse the Messengers or hold auditions, he would most often call upon Peterson. To celebrate Blakey’s centennial, Peterson has this year released two commemorations – I Remember Bu by his GenNext Big Band, comprised of first class Berklee students, and Legacy Alive by a crew of Messengers alums under the banner of The Messenger Legacy; both on Peterson’s Onyx label imprint. On this occasion Peterson had just performed an explosive set at the helm of the GenNext Big Band at the 15th annual DC Jazz Festival. After the gig Peterson sat down at DCJF’s Education Village for this Blindfold Test.

Ralph Peterson: That’s amazing composition from the Bud Powell book. I remember playing that piece with Walter Davis. The piano player smacks of Geri Allen and Jaki Byard maybe. So if it’s not either of those two, it’s someone of that ilk. I sat up trying to hear the texture of the ride cymbal, because the drummer was playing very Roy Haynes-esque, but it didn’t have that quintessential flat ride sound of Roy.

R.P.: Something wants me to say Rick Germanson on piano, Neal Smith on drums. Neal, that’s my dog, we have neighboring offices at Berklee. He has such an amazing, nuanced touch, and I know he loves this tune, so I thought it was Neal’s record.

R.P.: Is that Pheeroan akLaff? I’ve got some former students this could be; a Slovenian drummer named Andres. It reminds me of the music I used to play with David Murray and the music of that tour circuit – Craig Harris Tailgater’s Tales, Hamiet Bluiett, Bob Stewart…What I was able to identify was the sound of tuba as opposed to [string] bass, which led me to think that the group is Europe-based, but I like it.

R.P.: Two pianists come to mind right away – Horace Parlan and Walter Bishop Jr.; I don’t know if it’s them because there’s a quality there that I know from my association with Walter Davis. It sounds like it was written for a movie. The role of the drums here is pretty low-key – Connie Kay comes to mind, maybe Vernel Fournier. It just goes to show that artists the caliber of Art Blakey can’t be put in a box. His brilliance and his ability to be subtle and supportive was just as powerful as his ability to be bombastic and a leader.

R.P.: I thought it was Keyon Harrold on trumpet. I didn’t think it was Wallace [Roney], but what I find most interesting about it is Wallace’s ability to not weigh too deep into the harmonic explorations of Miles [Davis] playing against the tonality. And that’s made it deceptive to me because usually Wallace’s connection to Miles is obvious and direct, so this more subtle approach is nice to hear him do. There’s a lotta cats out here who can do it, but Wallace is to Miles what I try to be to Art Blakey.

R.P.: Is this Joey [DeFrancesco]? I like it, it’s a fresh approach to this Weather Report tune. This was one of the first complicated pieces of fusion that got my attention in high school. This was [originally] on Heavy Weather with Wayne Shorter, Joe Zawinul, Alex Acuna, and Jaco. What’s interesting is that Matt and I are same generation, so we were probably similarly influenced. I really respect what Matt does as a leader.

R.P.: Vijay Iyer? It reminds me of work that Greg Osby, Gary Thomas, and Steve Coleman have done together. The tune is based on Miles Davis’ “Four” but they’re playing on the upper harmonic partials of the tune. I like it, it swings and it’s out, and I like that. Both globally and regionally there’s so much music on a high level being produced by artists, where when I came up you were looking to be signed, but the paradigm has shifted and artists are freer to start their own labels.

R.P.: Samba school! Duduka da Fonseca? I love the feeling of this music of Brazil! My people are from Trinidad and Barbados, the islands closest to Brazil. That music is connected to Ghana and Ghanaian drumming. Other than Africa, there are more Africans in Brazil than anywhere else. I love that!

R.P.: Nasheet [Waits]? Is this Orrin Evans? I don’t know who this is but because of the way the drums are tuned it sounds like somebody from my generation, [because of] the openness of the bass drum and the depth and warmth of the toms. I don’t know who it is, but I like it, very nice piece.