Catching up with writer Angelika Beener

Back when we began our series of dialogues with Black jazz and music journalists & critics in the Independent Ear one of the newer breed of writers who have to a large extent operated in the still relatively new online media stream was Brooklyn-based writer Angelika Beener. In Angelika’s case the chief instrument conveying her take on modern music was her online Alternate Takes.

I recall our interview encounter one afternoon at a coffee shop in her Fort Greene neighborhood and how impressed I was at her perspectives on music, and how she skillfully engaged social justice & political responsibilities matters into her sense of the music.  I was also delighted to learn her jazz lineage, as daughter of the late trumpeter Oliver Beener, and as the niece of Nellie and the great Thelonious Monk.

As Angelika continued our dialogue I recognized immediately that this was a centered young woman with a definite writing agenda and a fresh point of view on jazz music. Her writing reflected the perspectives of someone who had grown up with hip hop as another vivid point of musical reference and influence.

As those Ain’t But a Few of Us dialogues and interviews slowly make their way up my publisher’s pipeline to book form, I thought it was past time to catch up with Angelika Beener’s current writing pursuits. 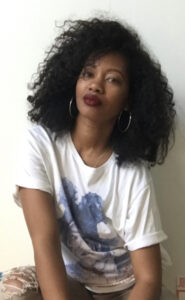 What are you up to these days with your writing?

These days, I’m working on relaunching my website, Kultured Child. A lot has happened in my life, personally and professionally since I launched Alternate Takes in 2011. I launched kulturedchild.com in 2017 to reflect how motherhood and parenting was affecting my writing, particularly the content and how music was becoming such a special element in my relationship with my son. The music was still central to my writing, but events of the world were deeply influential as well. Trayvon Martin was killed and Black Lives Matter was consequently launched, less than a year after I started Alternate Takes. My music writing is already scribed through a social and political lens, but it became increasingly important for me to add parenting to that lens, and most importantly, the influence that my son’s own thoughts and ideas about the world were having on me as a writer.

Given your choice, would you prefer more issue-oriented journalism or the tried & true personality/record-driven proclivities of the mainstream music prints?

This is a great question, and I’d have to say that it depends on who’s writing. With “issue-oriented” journalism that may center on issues of race, gender, and equity, I think it’s very important that the writer have an intimate, personal understanding of those issues.

Without an actual internal place to reference and tap into as a writer, I find that this kind of storytelling can feel empty, forced and can actually be a triggering interview process for the artist and triggering for certain readers, as well. Which really brings me to the impetus of my passion for writing about this music. There was, and there remains a shameful gate keeping around jazz journalism that is largely exclusionary toward black, brown and queer women. And when we are invited to participate in our own historical narratives, we are often met with patronizing – even sabotaging – experiences from white, male editors.

So I say that as long as writers come from a place of familiarity of the plights the artists’ experience, this can produce genuinely meaningful writing and can really give honor to the artists’ dimensionality and the music that comes through those experiences. I have had the honor of writing several pieces about the particular times we are living in and I have also turned down invitations to write about these times. My decision depends on my understanding of the sincerity and position of the hiring editor and the track record of the publication. Writing about these times is something I approach with my whole being. Our subjugation is not to be exploited because it happens to be trending. These stories should always be told, and it shouldn’t have taken a public lynching on May 25, 2020 for folks to finally decide that our plight is cover story worthy.

Is online journalism your current medium of choice?

As a writer, I’m writing almost exclusively for digital/online outlets. But I still get The New York Times delivered to my doorstep. I’ll probably never own a kindle or read an audiobook, unless it’s for a specific reason (Laurence Fishburne narrating The Autobiography of Malcolm X, for instance). I’m old school in that way. One of my favorite places to be is in my local bookstore, or any bookstore, for that matter.

Besides writing, what are your other interests in terms of immersing yourself in this music we call jazz?

I have been DJing for about six years, and then went to Scratch Academy to really hone my craft. After graduating in 2017, I started doing a lot of gigging. I’ve DJ’ed a few times for Jazz at Lincoln Center, which was really exciting because there really is a place for the DJ in jazz institutions and I’m grateful that they acknowledge that in having me DJ for them. Most of the gigs I’ve done, I have been fortunate to be able to spin the kind of music that I like, rather than cater to a particular audience. They hire me because they like what I bring to the table and that leaves me optimistic about the future of the DJ and jazz. There is definitely an audience outside of the live music audience that also wants to engage with the music. I also co-produced a documentary on Weldon Irvine, titled Digging For Weldon Irvine, and as the title would suggest, it really required a deep dive into the music and beyond. A very deep project.

Talk about some of the more intriguing and rewarding jazz recordings you’ve immersed yourself in during these pandemic times.

During the pandemic I have been revisiting a lot of vinyl that I already own. My son has gotten into music production and sampling, so it has caused me to get involved in the process. We pull records together that he or I think may be interesting for him to discover, and that’s been really rewarding. In addition to that, some albums that have stayed in rotation during the pandemic are Look to the Rainbow (1977) from Al Jarreau. The Genius of Ray Charles (1959) from Brother Ray is another one because it is entirely significant of my childhood, and I think that during these uncertain times, it’s been really important for me to find ways to anchor myself via the things that feel foundational and solid. Lots of Stevie Wonder as well: In Square Circle (1985), Songs in the Key of Life (1976), Talking Book (1972), and The Woman In Red (1984), in particular. Stevie is my… everything place! I am about to immerse myself in this Palo Alto album from Thelonious Monk, too. I’m really excited to do a deep dive on it.

One Response to Catching up with writer Angelika Beener