The Legacy of Freddie Hubbard

The attitude pendulum towards creative artists most often swings most heavily — as it should — to the enormity of their gifts with the passage of time for those whose careers were marked by questionable behavior.  Our collective memory tends to soften towards those guilty of even the most egregious behavioral lapses after they’ve passed on to ancestry, and as time allows us the opportunity to ponder what they left here for us to learn; their respective human frailties are dealt with a relative shrug or even softened into outright humor.  Such seems increasingly the case with one of the greatest trumpeters in the history of American music, Frederick Dewayne Hubbard, bka Freddie Hubbard. Freddie has been an increasing topic of conversation and artistic re-examination recently, at least in my travels.  And let’s face it, though nowhere near joining any sort of rogues gallery of jazz, Freddie Hubbard was guilty of his share of knucklehead behavior and judgment lapses during his time.

On the offstage occasions when I encountered Hubbard at the peak of his powers, either for an interview or in the capacity of a presenter, he was at best a bit mercurial.  At once supremely confident in his own brilliance, he sometimes appeared to labor under the withering glare of Miles Davis — who was often hypercritical of Hubbard, seemingly in the manner of a disappointed dad.  The fusion successes of peers Herbie Hancock and Chick Corea seemed to raise some jealousy issues; he tried in vain to emulate their crossover success and in so doing found himself instead falling out of favor with the cognoscenti, who dismissed out of hand his late period CTI and smoothie Columbia albums.  Hold on a minute Mr. Hardcore, those first few CTI releases were grits & gravy for this college undergrad, they burned up more than a few dorm room turntables.

Then we come to the troubling matter of his sad last few years of diminshed capacity.  Until the real story of his overblowing lip ailments were revealed in DownBeat, more than a few of us wondered why his playing was suddenly so weak and had almost completely diminshed the roaring flame that had stoked his playing through several different incarnations, from Open Sesame (Blue Note) through the early CTI releases when he was a pillar of jazz trumpet excellence.  (Come to think of it, perhaps Miles was irked that Hubbard’s physical powers outstripped his introverted charms.)  Even in his “smooth” moments on those otherwise forgettable Columbia releases, the majesty of Freddie Hubbard was still available in glimpses.

Hubbard’s last decade or so was another story.  Missing his majestic horn, I recall discussing his diminshed capacity with more than a few musicians.  I vividly remember Jackie McLean shaking his head at Freddie’s failure to heed sage advice about getting his chops back together by working with the man known as an ace trumpet “doctor” of sorts, educator William Fielder.  Instead of taking a much-needed break and working diligently at rebuilding his embochure, it seems Freddie foolishly soldiered on until his capacity was but a dim flame from the roaring bonfire he’d once been.  Let’s call this knucklehead behavior to be kind.

Freddie has been popping up a bit in my consciousness most recently through a series of recollections.  The first came a few weeks ago when the National Jazz Museum in Harlem held one of its Tuesday evening Jazz for Curious Listeners forums at their Visitor’s Center on 126th Street in East Harlem.  That evening, with bassist and museum co-director Christian McBride holding court, the subject was the legacy of Art Blakey’s Jazz Messengers.  The informants were two latter-day Messengers, tenor man Javon Jackson and trumpeter Brian Lynch.  The conversation inevitably turned to Hubbard because McBride and Jackson had been part of Freddie’s late-period ensembles, and being of the generation that came of age in the 1980s and 90s, as a trumpeter and a Messenger Lynch was indelibly influenced by Hubbard.  For their generation Hubbard and Lee Morgan were  pillars of trumpet expression; the Hubbard v.s. Morgan argument rages on as to who was the more powerful exponent of his instrument.  On this evening Hubbard was the unquestioned champion, at least for these three gentlemen.

Then recently, as part of my ongoing investigation into the Lost Jazz Shrines of Brooklyn being fostered by the Weeksville Heritage Center (see an earlier Independent Ear post for details), I had the great pleasure of interviewing bassist (and Hubbard’s Indianapolis homeboy) Larry Ridley and pianist Harold Mabern.  The subject was that classic example of hard bop trumpet playing, the April 9 & 10, 1965 performances at Brooklyn’s Club La Marchal that yielded the aptly titled Blue Note two volume recordings The Night of The Cookers. 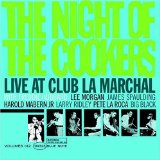 Ridley and Mabern were at the time regular members of Hubbard’s quintet (along with another Naptowner on alto, James Spaulding, and drummer Pete LaRoca).  They fondly recalled that seminal moment in jazz, when Hubbard and Morgan battled it out for trumpet supremacy, each a player of enormous chops and physical stamina; Morgan that evening was a guest of Hubbard.  Lee’s sad demise a mere seven years later, at the hand of a jilted lover — Frankie & Johnny writ large –on a gig night at Slugs no less, is the stuff of jazz lore.  At the museum conversation McBride suggested that Morgan, the slickster from Philly, had once teased Hubbard as a bumpkin on the latter’s New York arrival.  It was obviously serious business on The Night of The Cookers as Freddie had clearly proven himself a more than worthy contender by that juncture.

Saturday, April 10, three days after the anniversary of Freddie’s birth, the Smithsonian Jazz Masterworks Orchestra presented a program titled “Hub-Tones”, The Life of Freddie Hubbard.  Skillfully navigated by one of the DC area’s finest, trumpeter and obvious Hubbard acolyte, Tom Williams (who is also a worthy drummer), the program was an accurate (if somewhat incomplete) shapshot of Freddie Hubbard, particularly for those in attendance who were familiarizing themselves with this seminal trumpeter.  Piloting a band including the fiery alto saxophonist Antonio Parker, big-toned tenor man Tedd Baker, trombonist Bill Holmes (whose contributions gave the ensembles a nice heft), pianist Harry Appelman, ace bassist James King, and SJMO executive producer Ken Kimery at the tubs, Williams built a comprehensive program of Hub-Tones.  Williams reached back to Freddie’s debut release Open Sesame, and pulled up Tina Brooks’ “Gypsy Blue” for his opener.  Included also were such gems from Freddie’s experience as Wayne Shorter’s “This is For Albert,” from the Jazz Messengers book, and an “Up Jumped Spring” gem that brought out Williams buttery flugelhorn, where his attack most succinctly recalled Hubbard.

The Red Clay date, an obvious favorite of Williams, yielded its two diamonds, “Red Clay” and “Intrepid Fox.”  The former groove orientation driving the combustible altoist Antonio Parker, who is one of the real comers on his instrument.  Williams tied Hubbard’s career together through a series of between tunes narratives, though for my money he brushed off Hubbard’s forays into free jazz territory, offering not one selection from those explorations.  Granted, sampling something from Coltrane’s Ascensions, or Ornette Coleman’s Free Jazz, both with liberal Hubbard contributions, may have been a bit heavy for the occasion.  But surely Williams could have comfortably included a selection from Freddie’s contributions to Eric Dolphy’s seminal Out To Lunch, or the overlooked anti-war disc Hubbard made with synthesist Ilhan Mimaroglu Sing Me a Song of Songmy.  On the other hand, let’s not pick nits with what wasn’t on the program;,simply chalk it up to mild omission.

A friend seated in my row at Baird Auditorium on this evening recalled what may have been his last time seeing Freddie, when the trumpeter kicked his drummer’s kit offstage in a childish fit of anger.  As I said, knucklehead-ism sometimes got the best of Freddie.  But history will be kind to the enormity of his skills, and the lovely pallet of colors in his book.  I’m just happy Mr. Hubbard was able to enjoy some of the fruits towards the end, receiving a well-deserved NEA Jazz Masters award, followed up in March 2007 by a Kennedy Center jazz master designation.  Long live Hub-Tones!!!

13 Responses to The Legacy of Freddie Hubbard