Return Engagements: Voices from the Archives 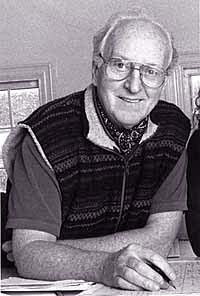 This is the first in a series of return engagements for interviews I’ve had the privelege of conducting with artists and others in the music down through the years.

Back in the early 1990s when I was director of the National Jazz Service Organization (NJSO) one of the board members who always had something useful, intelligent and erudite to say, at least in part because he was not someone readily identified with the jazz community — though a passionate supporter of the music nonetheless, was the distinguished composer John Duffy.  He’s the founder of Meet the Composer, a funding and service organization for composers which always considered jazz composers on par with European classical composers.  One conversation with John Duffy would quickly reveal that MTC outlook as a top-down philosophy because though his work as a composer was in the notated area more closely identified with European classical music and chamber music, John always had an open ear for the art of the improvisers and championed their cause.  The following interview was conducted in 1991 for an issue of the NJSO quarterly.

I think about John Duffy every time I’m reminded of the continued evolution of jazz music in the concert arena, particularly on those venerable stages that for most of their 20th century existence were the almost exclusive province of orchestra, opera and chamber music.  Thoughts of John’s views also come to mind whenever I hear music written and performed by artists more identified with jazz expression who endeavor towards a meeting of jazz and European classical forms, a musical coupling that one of our previous interviewees, pianist Ethan Iverson of The Bad Plus, has pondered in their blog Do The Math.  And that’s actually the juncture where this conversation with John Duffy began.  Where exactly are we with this still nascent partnership or adversarial relationship circa 2009?  Read what John was saying towards the end of the 20th century; you be the judge, and your comments on the relationship of jazz and European classical music in today’s world are welcome below.

Where do you see jazz and classical music forms meeting?

John Duffy: I think now that jazz is the center, rather than the symphonic world, and jazz composers are bringing all of these currents — these cultural and ethnic currents, and the whole area of improvised and notated music to symphonic work, music theater work, dance work, work for big band… In other words the alignment has turned around and the exciting work that is coming is not being so much generated or initiated by the orchestras, but by jazz composers and people who work in various forms, whether its dance music, symphonic, chamber… [they] are in fact imbuing symphonic music and symphonic forms with the particular characteristic of jazz.  Number 1: improvisation; No. 2: notation, which is often quite different from the traditional notation for symphonic music or chamber music; No. 3: with this incredible vitality, spirit, and imagination [of jazz].

What would you say have been some truly memorable and meaningful meetings between the two forms?

JD: I think Julius Hemphill, both in his music theater, in his work for the Richmond Symphony, in his work for his own Septet; his work really stands out.  Ornette Coleman stands out ["Skies of America"]; Gerry Mulligan, the works that he wrote for symphony orchestra and himself as baritone saxophone soloist; Hannibal Peterson’s "African Portraits" [and "Diary of An African American"]; David Baker in his work; Don Byron in his work for dance; Billy Taylor in his work for the Julliard String Quartet working together with his group; George Russell in his big band and chamber works; and then the members of the World Saxophone Quartet: Bluiett, Murray, and Lake; [Marty] Ehrlich is also a person who has brought that kind of sensibility and that kind of cross-cultural spirit and extensions of these different forms, as has Leroy Jenkins.

One musician who you would probably include in that list, but who kind of denies that he is a jazz musician, would be Anthony Davis.

JD: Yeah, I agree…  This issue has overtones that come out of the long history of intolerance and racial discrimination in this country, where jazz and the music of black people — whether its hollers, blues, gospel music — which has influenced music throughout the world, has not been held in the regard that it should have been.  There’s a political overtone: there are some people who find the word jazz offensive — Max Roach does, and probably Anthony Davis, though I don’t want to speak for him.  What they want is the same kind of recognition that is afforded Isaac Stern, Copland, Bernstein, etc. and which is often not forthcoming.  Certainly Anthony Davis, when you listen to his operas, although the vocal lines very often sound like some that you would hear in Benjamin Britten’s operas, the accompaniments have most inventive blues and improvised characteristics to them, and they have rhythmic vitality and association that comes out of a jazz base.

Who from the classical side in recent times has expressed a sincere interest in working with jazz, jazz composers, jazz forms?

JD: In the past, of course Milton Babbit did — he has a background in music theatre and jazz; he wrote that work for jazz at Brandeis which commussions George Russell’s "All About Rosie".  Charles Wuorinen… more out of African drumming, but it has certain overtones from jazz; Ollie Wilson; Hale Smith…  I think that Morton Gould over the years, and certainly [Leonard] Bernstein over the years.  But what that music may miss is the spontaneity that improvised music can bring, and also the firm basis of life in jazz.  I think it makes a difference if you have a life in jazz, if you come out of that…

To give you an example, and this may be far-fetched, it would be like Michael Jordan, fabulous basketball player, dazzling… he also loves baseball and he was dipping into baseball.  Now I don’t know how good he was [in baseball] but he certainly made a decision that he would move back to where his roots are.  I think also that its interesting when you hear Stravinsky’s jazz, from the work he wrote for Woody Herman… he wrote some jazz works.  He was dipping into that as was Copland, as was Milhaud.  They weren’t rooted in [jazz].  It’s like when you grow up in a certain neighborhood, you come from a certain background, no one has to tell you what the story is, you’ve got it right in your bones, in your muscles, it’s part of  your cultural life.

What do you think of some of the younger people from the classical community who have made inroads into jazz to some degree, people like Marin Alsop?

JD: I can’t comment on that too much, all I know is that she’s a fabulous musician and that she works from the heart and the guts.  I think that one of the things that does come through in this is that it’s also time that we start just referring to music as Music, just as we should start thinking in a more global way.

Do you think we’re too conditioned to labeling to turn back now?

JD: No, we’re not.  I think if you introduce Max Roach, he is a sublime musician; he is on the same level as Itzhak Perlman; [Max] is in fact more inventive in a certain sense, he can improvise, he writes music, and he doesn’t need to be introduced as Max Roach, the Black American jazz artist.

What examples of bringing these forms together have received support from Meet The Composer?

One of the more troubling aspects of these masterworks has been the one-shot nature of their performance; beyond their concert premier there usually is no afterlife, particularly in the case of recording opportunities.

JD: No, I think that composers who don’t write works like that also face the same problem — whether they’re from African, Asian, European, Latin American ancestry… in terms of just the tolerance and political background; in terms of stylistically… whether it’s twelve-tone, jazz-influenced, minimalist, neo-romantic… The composers face the same kind of problems: #1: symphony orchestras, opera companies, chamber groups are flooded with works.  They’re trying to market works and they tend to lean towards the works that an audience is familiar with.  They have generally, especially symphony orchestras and opera companies, limited rehearsal, and instead of having leaders who commit themselves to the performances of new works, they look at their budgets and say ‘look, it’s gonna take us extra rehearsal to do a new work and it’s not going to match up with the box office, so there are economic questions… whether or not this is all true is doubtful.  I think it’s just that the audiences, or more, that the orchestras very often are run with a view that has to do with marketing and certain kinds of almost pathological habits of thinking.  And the other thing is that music directors are not around to provide leadership, they’re traveling all over the world.

Now in terms of the recording, it’s so expensive to record, especially symphonic work that even if you do a CD the expense… even with an arrangement with an orchestra whereby the orchestra will rehearse the work and perform it several times so that it’s still going to cost you [big dollars] to record, and very often those records don’t sell.  And it’s not only new works; if the New York Philharmonic were to record Haydn’s symphonies they’d probably be lucky if they sold 5,000 copies, so it’s an economic thing.  On the other hand you do have situations where you have Reich and Glass, who have a wide audience, who sell well.  But their work is not symphonic, it’s usually for their small ensembles.  If we can all start thinking of people just as composers, conductors, performers and begin to think in some kind of evolved state of mind so we think beyond these categories, beyond the labels and get a mind set that looks at the globe…

Next time: An archival conversation with the longtime genre fence-straddling flutist James Newton on this subject.