Ain’t But a Few of Us: Black jazz writers tell their story #6

Installment #6 in this ongoing series of stories on their development, trials, tribulations and in some cases recommendations from black music writers continues with a contribution from RON SCOTT, who comes from a perspective unique to our contributors thus far.  And that’s because Ron is a regular contributor to what has long been referred to in black communities as "the black dispatch."  Ron’s primary vehicle for his jazz writings is the venerable Amsterdam News, for many decades the New York City community’s most reliable dispatch of news in and around the black community and of concern to black folks.  Ron is certainly unique in that respect as other traditional black dispatches such as the Chicago Defender, Pittsburgh Courier, and (Cleveland) Call & Post have long neglected this art form we call jazz, which is a unique development of the African experience in America.  Per usual we started this virtual conversation trying to learn what motivated Ron Scott to write about serious music.

To be honest writing wasn’t really in my program…  English was my favorite subject in high school.  As a senior I submitted two short poems for the yearbook; unfortunately they weren’t accepted and I was very disappointed.  While in college I continued writing poems as I pursued my goal to become a social worker.  After college I attended NYU graduate school, the school of social work.  While looking for a part-time job I noticed on the school bulletin board a freelance writing position for a soul [music] magazine (Soul Sounds) in Brooklyn.  I went for the interview and was immediately hired; that was the beginning of my career as a music writer.

When you started on this quest were you aware of how few African Americans there were writing about serious music?

At the time I was not aware.  It should be noted that I started out writing about R&B music and later met and became close friends with the writers in that genre; at that time I wasn’t aware of the writers in jazz.  When I started reading the Village Voice on a regular basis I became a fan of Greg Tate and Stanley Crouch.

Why do you suppose that is still such a glaring disparity — where you have a significant number of black musicians making serious music but so few black music writers or commentators?

I view jazz like the NBA (National Basketball Association) — a host of black players but very little representation as commentators, managers, lawyers, promoters, agents or writers.  Unfortunately I feel that institutional racism is alive and well in jazz.  As a point of reference just look at our representation in the major jazz publications like DownBeat and JazzTimes (and what happend to Stanley Crouch at that publication).  Even Amiri Baraka, who has written a wealth of books, including my bible Black Music, is not a welcomed contributor to any of the major jazz publications or dailies.

Do you think that disparity of African American writers contributes to how the music is covered?

Most definitely music is objective, it’s based on emotions, life experiences, societal stimuli, and cultural background.  When black writers aren’t proportionately involved in sharing their thoughts about the music the coverage becomes one-sided.

Since you’ve been writing about serious music, have you ever found yourself questioning why some musicians may be elevated over others and is it  your sense that has anything to do with the lack of cultural diversity among the writers covering this music?

It’s similar to Benny Goodman being called the "King of Swing".  How could that be possible when he played under the time of Fletcher Henderson, Count Basie, and Duke Ellington?  A lack of cultural diversity is a mild phrase for stating the obvious.

This is a difficult question, but most of it has to do with black history.  I feel if more blacks were really aware of their history and the role that jazz has played in society they would be more apt to promote the music.  However, the same could be said for the electronic media; just look at the Grammy Awrds.  Where is jazz on their prime-time priority list?  Or radio?… Only one jazz station in New Jersey and not one in New York City, the multi-media capitol of the world!

How do you react to the contention that the way and tone of how serious music is covered has something to do with who is writing about it?

This relates to my answer to [the question about the dearth of black jazz writers].

In your experience writing about serious music what have been some of your most rewarding experiences?

Writing is my life, without it I wouldn’t exist.  My most rewarding encounter is being accepted into the jazz family of musicians and becoming friends with them as well as their family members.  More than anything I am honored and humbled that these music warriors have accepted me into their most significant lives.

What obstacles have you run up against — besides difficult editors and indifferent publications — in your efforts at covering serious music?

Difficult editors and indifferent publications covers it for me.

If you were pressed to list several musicians who may be somewhat bubbling under the surface or just about to break through as far as wider spread public consciousness, who might they be and why?

There are many young musicians who fit into this category, but I would say alto saxophonist Jaleel Shaw, saxophonist Marcus and drummer E.J. Strickland, and pianist Aaron Diehl.  All are composers bringing their own sound and personal exciting colors to the show.  They aren’t playing safe but taking chances incorporating spoken word and black history moments, connecting the dots…  Aaron, a recent graduate of Julliard, has yet to record his debut album but is already on the radar of major musicians.  He plays everything from blues to stride to straight-ahead and has a strong grasp of the music from a historic perspective.

As we are now in the second half of 2009, what for you have been the most intriguing records released so far this year?

Unfortunately, I tend to listen to the same stuff over and over when I like it, so stuff that just came out this year is still on my "to listen to" list.  But here’s a few: E.J. Strickland In This Day, Gregory Generet (re)generation, Pyeng Threadgill Of the Air, and Frank Wess Once Is Not Enough.

THE MUSIC & INFLUENCE OF GEORGE RUSSELL

Concerto for Billy the Kid

The Birth of the Third Stream

At the Five Spot

Jazz in the Space Age

Live at the 2007 Monterey Jazz Festival

Posted on July 23, 2009 by The Independent Ear
Posted in That's What They Heard | Leave a comment

(Featuring the music of MOACIR SANTOS)

In Pursuit of the 27th Man

Walking with my Bass

(Soundviews feature of the week)

It is What it Is

One for Reedy Ree

Jumpin’ On U Street

Washington, DC’s fabled U Street is once again one of the more dynamic corners of our nation’s capitol.  One big figurative tombstone for years after post-MLK assassination anger laid the area to relative waste, the entertainment heart of black Washington has arisen from the ashes with a steady vengeance over the last several years.  An inevitable product of urban gentrification, U Street now attracts a rich multi-culti mix of nightlife denizens throughout the week with a variety of restaurants (from famed Ben’s Chili Bowl to cloth napkin dining) dance clubs, bars, and just plain hangin’ out.  On weekends U Street becomes positively kinetic.  And to be sure, jazz music is deep in the mix.

Summertime ’09 in DC has been unseasonably pleasant, a welcome respite from the usual hot & sticky clime in this risen-from-a-swamp city.  An exceedingly pleasant evening beckoned us to Twins Jazz (1344 U Street; for once a jazz club upstairs!) to celebrate the release of trumpeter Michael Thomas’ new (separate) discs Live at Twins Jazz – VOl. 1 and Vol. II (Jazhead — one z — www.jazhead.com).  Thomas is an unabashed hard bop school trumpet player straight out of the Lee Morgan/Freddie Hubbard mode who favors a briskly-blowing, Messengers-intense sound rich in the bedrock blues.  Twins Jazz (www.twinsjazz.com) is one of those long, narrow rooms with a bar in the back, food & drink table service, and red walls festooned with jazz and other photographic subjects.  Twin sisters Kelly and Maize Tesfaye, members of DC’s thriving Ethiopian populace (reputedly second only to Addis in size), have persevered for years to build a solid jazz policy that provides a welcome stage to many of DC’s finest and other vet and emerging players from around the region. 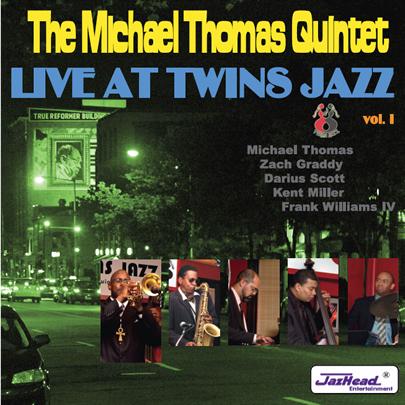 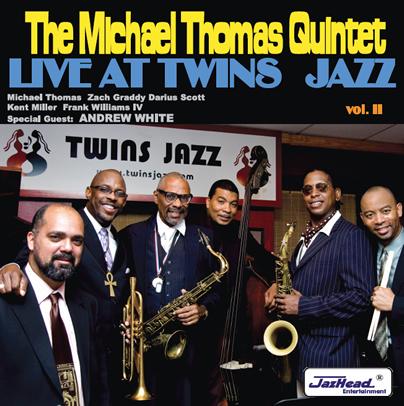 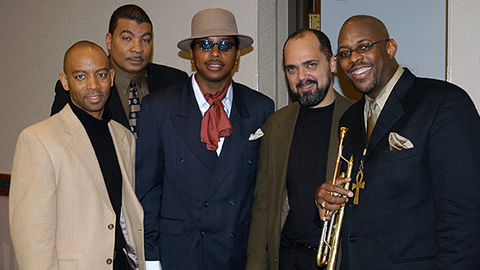 Blissfully easing our way to the car we passed yet another tenor player in a U Street basement joint blowing pure joy.  Meanwhile down the street Tim Warfield was settled in for a full weekend of tenor madness at The Bohemian Caverns www.bohemiancaverns.com), which has risen again much like U Street itself, as a prodigious 3-story entertainment zone unto itself.  The lower-level Bohemian Caverns boasts a robust schedule of traveling players you might want to investigate over the next few weeks:

…And don’t forget the U Street Jazz series, weekends at The Islander Caribbean Restaurant…

Posted in That's What They Heard | 2 Comments