Trumpeter Maurice Brown has been one to watch for more than a minute.  Early on, courtesy of his Hip to Bop release it was apparent that here was a young artist intent on filtering his jazz-steeped improvisations through the prism of the music of his life — hip hop, funk, and a healthy sense of "I love the blues, she heard my cry"… an overall quest for the good groove.  My curiosity was further piqued when several years ago the Chicagoan relocated to New Orleans, where he was eventually uprooted like so many by Katrina.  That move suggested a desire to further immerse himself in the heart of the groove, which is the essence of New Orleans music aesthetic.  Less than two years later, spotting him on the list of Thelonious Monk Instrumental Competition finalists I was curious as to how he would fare in that environment.  He finished just a bit out of the money, no surprise given the weight Monk Competition judges appear to place on anyone supposedly striving to be "different." 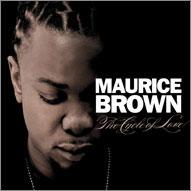 No tunnel vision here, Maurice Brown is not stuck in traffic on the road to "different."  Blessed with a fat sound, impressive facility, and a keen sense of the blues in pursuit of the infectious rhythm, Maurice Brown is a bit of a throwback to what used to be referred to as "soul jazz" — 21st century edition.  Last night at the Kennedy Center Jazz Club the latest incarnation of Maurice Brown showed impressive evolution and a successful endeavor at balancing creativity with a real desire to connect with his audience.

As opposed to the kind of coolly aloof, hipper-than-thou posture of too many of his peers, Brown was intent on engaging his audience not only through his infectious music but also with a kind of joie de vivre in his between tunes patter and intros that indelibly strenghtens that artist/audience bond.  The subject was Brown’s well-crafted new record The Cycle of Love (Brown Records).  His crew included tenor man Derek Douget (’bout time his potent sound was displayed outside of New Orleans!), energy source Chris Rob on piano, rambunctious drummer Joe Blaxx, and bedrock bassist Solomon Dorsey.  Did he connect with this DC audience?  The line to buy CDs and get Brown’s autograph after the gig was prodigious.  Don’t sleep on Maurice Brown (www.mauricebrown.net).

This entry was posted in The Audience. Bookmark the permalink.