Posted on January 8, 2010 by The Independent Ear

Nonsense is a hip new glossy periodical published from an African-American and politically progressive perspective that engages art, culture and politics as its three guiding pillars.  Published by Bob Daughtry and Norman Reid, the premier issue of Nonsense features such lead articles as "The Permutations of Miles Davis" and "The Obama Dialogues", and a good deal more rewards. 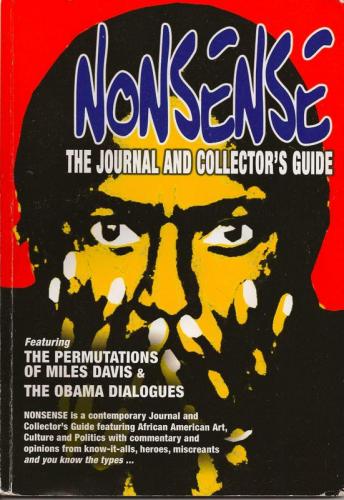 Bob Daughtry has been a friend, colleague and fellow WPFW radio broadcaster since I first relocated to DC in ’89.  Right away I admired his knowledge, advanced perspectives, and ability to intelligently blend jazz and related musics from the ancient to the future.  Not to be missed is Daughtry’s annual Jimi Hendrix radio celebration, often featuring rare interviews and recordings, ala the extensive live interview he conducted with Band of Gypsys bassist Billy Cox during his November ’09 Hendrix special.

Several months ago when Bob related that he was about to launch a new magazine, the warning bells sounded: Was this really a good time for a hard copy start-up periodical?  Scanning the prototype — with its shades of the very informative, edgy periodical Wax Poetics — I was convinced that indeed here was something a bit different.  So I quickly offered Bob an opportunity to us why and how Nonsense would go about the business of proferring fresh perspectives.

Why Nonsense, and why now?

Here is what we say in the premier issue of Nonsense: The Journal & Collector’s Guide about the idea of nonsense, I believe this will strike you as it did me; my partner Norman Reid found this and it appears on the inside cover of our premier issue:

"Nonsense is that which does not fit into the prearranged

patterns, which we have superimposed on reality.  There

is no such thing as "nonsense" apart from the judgmental

intellect, which calls it that.

Nonsense is nonsense only when we have not yet found that

point of view from which it makes sense."

— From The Dancing Wu Li Masters by Gary Zukav

I find that a little something to stimulate one’s thinking and expand one’s horizons.  Norm and I believe that among the more important challenges for any of us to continue to grow as human beings it is vitally important to be open to the infinite number of possibilities that every situation has the potential for.  The danger of course is that complancency is always lurking and it is one of the more difficult conditions to see and overcome.

So what are the guiding principles behind your development of Nonsense?

We believe in Go for it…  Aim low you’ll hit low…  Aim high you’ll hit high…  Nothing ventured, nothing gained."  Chatter from the sidelines at your own peril and risk becoming irrelevant if you wish.  I’m going to say what I think.  I am going to do my homework and then write it down.  There will be some issues and ideas that my children will be able to say that they definitively know what their dad’s position was.  We hope that we can contribute to the thinking and ideas we encounter in some humble way.

There are so many of our people who have made us all better because they lived and chronicled their thoughts and feelings.  They were compelled to ply their trade, to create art, to play music, to run for political office, to speak out, to take a stand and most importantly to whenever possible directly help others.  It’s my and my partners’ desire to be involved in these kind of high aspirations.  To know that way back in the day there were men and women like Paul Robeson and Marian Anderson who were out on the front lines speaking substantively to the issues of concern for ordinary Black folk when they could easily have given in and become comfortable and well paid house niggas complicit in keeping us confused about this vicious system designed to fully exploit us.  Each issue will cover the areas of Black culture, music, art, and politics… as a starting point.

What’s the publishing plan for Nonsense?

Our intention is to publish three issues over a one-year period.  We debuted our first issue in mid-July 2009.  The next issue will hit in late January 2010, and our initial plan is for the third issue to be out by July 2010.  We anticipate that by the third issue (possibly the second) we’ll be online at the same time.  The hard copy issues are intended as collector’s items.

What’s coming in your next issues?

The most likely that I am completely comfortable in mentioning is the "Obama Dialogues."  We are planning features, reviews and interviews with or about people we would like to bring to a wider audience.  Musicians and artists like John Coltrane, Jimi Hendrix, and Thornton Dial.  I’m trying to catch up to the metal sculptor Uzikee.  I hope to interview Tricia Rose who has written extensively on hip-hop culture.  There are so many ‘masters’ past and present that should be featured.  A now departed and very creative [WPFW] music programmer named Jimmy Gray used to say about putting together music shows on the radio ‘Just play the Masters of your time.’  That’s it!  We are looking to bring to ever-widening understanding the ‘Masters’ for all our times.  The Great Greats, known, unknown, and under known… Black Patti, James Baldwin, Chancellor Williams, Howard Thurman…

We are going to feature serious music and musicians, serious art and artists in various parts of those disciplines and the issues of the day from our vantage point.  We are living in an increasingly judgmental world.  In these times real nonsense has become increasingly prevalent.  I say this because no one answers questions directly anymore.  The cause and effect of such deception, duplicity, disingenousness, or whatever you’d like to call it, is that the questions asked are often as stupid or as calculated as the evasive and self-serving answers.

Much of what we see is pre-determined by the so-called ‘experts’, the insiders who want us to think they know everything.  We are not supposed to think.  All we should do, if these ‘experts’ have their way, is listen and regurgitate to others their views verbatim.  So it feels like what passes for discourse, conversation, or whatever you call it is really bullshit.  It’s meaningless and intended for the purpose of dumbing down society.  It is a masquerade that is properly called NONSENSE.

Are you interested in submissions from artists or pitches of story ideas?

We would love to receive submissions for publication AND we appreciate feedback — positive or negative — but especially constructive, giving us a sense of how we can improve.  We believe in the genius of the public.  We are very interested in having women widely represented in our publication; but please, no rants because we’ll take care of that department.  [I’m grinning as I say this.]

How are you going about developing a readership for Nonsense?

We are reaching out to get a feel for what people are interested in.  We are looking for strong opinion pieces on the difficult issues of our time, especially from a cultural perspective.  Number one is, and always has been, RACE, the giant elephant in the room!

Other issues of the day need full explication.  There are all manner of perspectives to be considered; e.g. has the larger society altered the dynamics of issues like ‘gay marriage’ within ethnic enclaves where it has always existed and been treated respectfully?  Has the system with its ulterior motives of for profit and its incessant march of commercializing, privatizing, and codifyiing everything in controlling and oppressive ways, created new frictions that have never previously existed or never before had a place in the cultural interactions of the African-American and Hispanic communities?

There is the larger societal issue of individual freedom.  That’s not just an issue for Black people.  I want to highlight The Real ID Act and other very dangerous programs that have been quietly put into law or are currently being seriously considered that impact everyone.  These threats to our freedom are like a fire in a partitioned home.  It does not matter which little piece of a divided setting you live in because fire is an equal opportunity destroyer.  So is Facism.  Nonsense, the Journal & Collector’s Guide, takes the position that the decade of American ignorance, i.e. the first decade of this new century needs to be seen for what it is.  That decade sold us 9/11, that sold us two costly wars and that elevated an idea called Enron, which in our lexicon means Sham from the git go, or ‘white boys gone wild’.

A decade that showed the ugly face of racism again in New Orleans during Katrina, as well as in the Immigration debacle, and both continue.  More shams like derivitaves and credit default swaps.  Racist killers celebrated like Karl Rove and the fat bastartd bionic hearted cheesy SOB ‘tiny [penis envy] Dick Cheney, and his lap dog ‘Junior’ (better known as "Shrub" in Texas ’cause he was never cool enough to be a Bush).  Let’s pause to hear from Big Mama Capon, great Aunt to Mother Goose, who says in her modern urban griot all encompassing way…

spending your money ’cause that’s how it works.

If you think too much we’ll put you with the jerks.

Shine Shine I hear you can swim mighty fine

But one missed stroke and your ass is mine.’

Big Mama Capon says that this language is all the contracts you sign with the Moneychangers.  Remember them?  What happened to the rhythm…?

On and on the public relations machines and the ‘behind the curtain’ fake-a-trons and their three card Monty mis-direction magic tricks show rolls on, giving us the great ‘Barry’ himself and even the King of the Jungle — all fakes.  It’s time to see our times and the Decade of American Ignorance for what it really is, total and complete Nonsense.  Hotep!