Ain’t But a Few of Us: Black music writers telling their story #13

Posted on December 9, 2009 by The Independent Ear 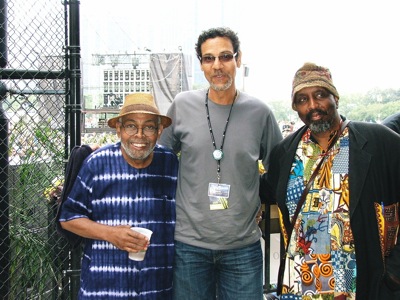 I first encountered Chicago-based writer Rahsaan Clark Morris a few years back when working with the Jazz Journalists Association to establish fellowships to a journalist conference in California in the name of my late friend and colleague, the Harlemite jazz writer Clarence Atkins.  Rahsaan was one of the young African American writers who were supported through this effort to attend the conference.  Rahsaan’s writings have appeared at Jazzhouse.org (the JJA site), the Jazz Institute of Chicago publication, the Great Black Music Project, JazzReview.com, and Creativity Magazine among other sources for his thoughtful voice.

What motivated you to write about this music in the first place?

I guess the thing that motivated me and got me thinking about writing in the first place was Amiri Baraka’s essay "Jazz and the White Critic" published in his collection of essays entitled Black Music from 1968.  The thought occurred to me that Black folks should be in control of their own culture and how it is appraised and critically approached.  I always thought it was the highest order of cultural arrogance to assume that someone from outside a group that had been culturally dispossessed could come in and present criticism of that culture, especially because of the pre-60s American separatism that had gone on for so long.  Baraka’s argument made the most sense to me, especially if you go from the lead point that this music comes out of the Black experience in this country.

After reading the mastheads of certain jazz publications and reading the names of a lot of liner note authors, I could guess that there were not that many writers of color, and because they were so few in number, I could tell from the tone of the writing and some of the allusions in the writing, that there weren’t that many brothers — or sisters — writing about the music.

Why do you suppose that’s still such a glaring disparity — where you have a significant number of black musicians making this music but so few black media commentators on the music?

I think it has something to do with power: the power to put certain people into writing positions, the power to put certain people into editorial positions.  If the publications are of the commercial nature, as most are, and they are owned by white media conglomerates that live on sponsorship and backing, how can we expect an independent Afro-centric position to be put out before one that will safely further the commercial interests of the publication or media conglomerate?  I’m not saying I like it, but I am saying that’s the way it seems.  Then, there must be some networking from the journalism departments putting out writers at Berkley, NYU, Columbia, and Northwestern, and I can’t think of many who are African American males.

I left Denison University after my junior year to make a living in theater and always enjoyed music and writing.  But the jobs are given to graduates because, I suppose, it looks better to the employer if a resume is degree-laden.  Do you know a lot of degree-laden brothers who choose to write about Ornette Coleman or the AACM… besides maybe George Lewis?

To some extent yes.  But, you do have certain publications like Wire, or Wax Poetics that do a good job of covering other stories that wouldn’t necessarily be covered in Downbeat or Jazziz, like a story on the development of the Fania record label, or how Creed Taylor put together the sound that became CTI Records.  {Editor’s note: those treatments appeared in issues of the estimable Wax Poetics]

In my experience, it has been up to the editor who gets covered.  I write about, or "cover", anybody I choose and then it is up to the editors or people putting the pubkication together to include my pieces or not.  Sometimes, there are two African-American musicians’ CDs to be reviewed and only space enough for one review.  A white writer does one review and I do another.  I don’t think lack of cultural diversity ends up determining who gets published first, but it definitely could be a factor.  We all like to think the better piece gets published and if it is not mine but the other writers’… so be it because I know mine was good or I wouldn’t have handed it in.

Now that is a multi-faceted question which could be explored for a while.  Most of those publications are market-driven.  Secondly, this form of Black music is not the most popular form.  At least, it seems, among American Blacks by and large.  So the publications appear to push music product that is (a) commercially viable and, (b) musically popular and/or accessible, so that months’ copy of Essence or Jet can move off the shelf.  Things may be changing, but it can’t come fast enough as far as I’m concerned.  The National Association of Negro Musicians held its convention here in Chicago andd there wasn’t a rush to get tickets.

That’s pretty much true of whatever topic you’re talking about.  I found some Black folks who go to hear serious music regularly who could probably write about it better than some Black writers who never get to that kind of show.  But, of course, a writer who comes from the same background as the artists involved would by nature be more sympathetic to what the artist is up to than someone who does not come from that environment.

In your experience writing about this music what have been some of your more rewarding encounters?

This actually happened before I actively started writing about the music.  I had gone with my wife to New York in the late 80s to see some plays, particularly Denzel Washington’s Shakespeare-in-the-Park production of Richard lll.  We were waiting in the line with our vouchers, which is what you have to have to get a ticket, and I was playing a cassette I had recorded probably 10 years earlier of Ornette Coleman and Dewey Redman playing live at the Jazz Showcase here in Chicago.  As we were waiting I spotted Ornette walking with his daughter through the park by the theater.  He heard the music playing and came over.  He remembered me from the Showcase concert because I had given him the master and dubbed a copy for myself that night.

Another time later on, I was doing the lights for the Chicago Jazz Festival one year and I had been talking to Famoudou Don Moye about doing an interview with he and Lester Bowie, calling myseelf covering their performance of Brass Fantasy.  I didn’t know it, but as I was watching the rehearsal in the afternoon a woman wearing a light straw hat came down stage right in a wheel chair.  I recognized her almost immediately — it was Melba Liston.  I found out later from Dr. Bowie she had done a lot of the charts for the band and she was just checking out the rehearsal.  I asked if I could take her picture and she graciously consented.  After I got my camera out Lester and Rufus Reid came up and I took a shot of all three of them.  It is one of my favorite shots.  I noticed people asking each other, who was that woman in the wheelchair and I just smiled to myself.

What obstacles have you encountered — besides difficult editors and indifferent publications — in your efforts at covering the music?

Even though I am in the stagehands union and can get backstage to most events anywhere in this country, security is a problem and a lot of the time I will have credentials but some folks don’t believe me when I tell them I’m a freelancer for different publications.

What have been the most intriguing records released so far this year?

I still love the music of and have a lot of hope for the alto saxophonist Matana Roberts [Editor’s note: check The Independent Ear for more on Matana].  She’s originally from around [Chicago] but I think she spends more time now in Boston.  She recently made a splash with her trio Sticks and Stones on Thrill Jockey Records.  Then there is the lithe singer Ugochi (full name: Ugochi Nwaogwugguw) with Nicole Mitchell’s Black Earth Ensemble.  Her coming out will probably take somee time, but she has a remarkable voice and a great talent for delivery.  (Go to the archives at www.greatblackmusicproject.org for a review of a poetry performance by Ugochi at Malcolm X College here in [Chicago].  There is the young drummer Isaiah Spencer, who works with Ernest Dawkins’ New Horizons Ensemble and the Fred Anderson Trio.  (I call him Young Elvin because his style is as energetic and flowing as Elvin’s was.)  He also leads jam sessions every Sunday night at Fred Anderson’s Velvet Lounge.  Then there is the wordsmith Khari B., AACM saxophonist Mwata Bowden’s son who plies his trade with Ernest Dawkins’s Big Band, the Chicago Twelve, creating provocative poetry both with that ensemble and at other poetry slams.  I love the playing of vibraphonist Jason Adesiewisz, he of the young avant gardists helmed by Ken Vandermark and Hamid Drake.  Then of course the bassist Darius Savage, who sometimes shares the stage with Isaiah Spencer.

2 Responses to Ain’t But a Few of Us: Black music writers telling their story #13