Miles Willis is a dedicated crate digger often in search of rare recordings.  Formerly the lone jazz programmer at KPFT-FM, Pacifica Radio in Houston, TX, since relocating to the DC area Miles — who is a biologist 9-5 — can be heard on WPFW, Pacifica Radio in the Nation’s Capital (listen live at www.wpfw.org).  Miles also contributes reviews and reportage to Barry Nix’s webzine Cultural Forces.

Back in the mid-1980s when CDs began their market domination, some hasty music lovers liquidated their vinyl collections.  I’m sure you know such ultimately misguided individuals.  Considering that you may have been a happy beneficiary of such haste — likely through some local old-vinyl purveyor or other — was that folly or prescient move?

I think those who liquidated their vinyl collections did so believing that lps would become obsolete.  I remember reading accounts of new CD owners who literally swooned at the ‘pure, enhanced fidelity’ of sound that CDs supposedly provided.  But though it can’t be measured acoustically, there is nothing like the ‘warm’ sound and shimmering ambience of vinyl.  And the fact is that there remain to this day a number of valuable recordings that have not been issued or transferred to CD, e.g. Chico Freeman’s Kings of Mali or anything by vocalist Clea Bradford.  And even CDs go out of print.

As a jazz enthusiast, vinyl recordings represent the way that jazz was originally and, to my mind, should be heard.  There’s nothing like holding a piece of vinyl in your hands, surveying the surface in the ambient light and then gently placing it onto a turntable to put the needle on it.  I would liken it versus playing CDs to the difference between cooking food over a fire in a skillet or microwaving it.

Now that MP3 is a reality — not to mention whatever formats the technocrats may cook up in the future — has vinyl receded even further in the rearview mirror, ala the 78 RPM format?

I think that depends largely on how each person ‘consumes’ music or what role it plays in their lives.  MP3 is a way of having access to music.  The collection of vinyl remains the most real and visceral way to ‘possess’ music, to have tangible contact with it.  As archaic as it sounds, I still very much crave that sensation of holding records in my hands.

As you go about merrily crate digging for old vinyl recordings, what kinds of things attract your attention?

What gets my attention are the works of obscure artists or the rare recordings of the renowned.  Things of some important historical and/or cultural significance will catch my eye as well.  I look closely at the sidemen; for example I buy anything which has Elvin Jones playing on it.  Odd pairings of musicians will grab my attention as well.  I also seek to fill gaps in my collection.

Bluebook and other ratings systems in terms of the "book value" of supposed rarities aside, what in your gaze truly constitutes a "rare" vinyl record find?

A ‘rare’ find for me is something that is out of print and/or that I previously may only have heard or read about, or that I’ve been seeking for a long time.

Besides the rare items, when you hit the stacks do you generally have a "wish list" in mind or are you so intrepid that you simply delight in the process purely in hopes of uncovering some useful nugget or another?

I sometimes look for particular items as they may relate to some presenation I’m planning for my show, but mostly I revel in the pure joy of serendipitously finding something that I am immediately happy to ‘possess.’

Talk about some of your recent vinyl "finds" and what it is about that/those recored(s) that attracted your interest sufficiently enough to cop a purchase.

I was planning to see Steve Turre who played here recently and just happened to find his first two recordings, on vinyl, which I was able to have autographed.  He was surprised to see them as well and told me about his own illustration of the cover of one of them.  And I also recently found a 2-record compilation set of recordings from the long out-of-print Xanadu label.

What have been your favorite sources or retail outlets for vinyl record crate digging — whether that be store(s), private collection(s), garage sale(s), record convention(s), or some other source?

Joe’s Record paradise is where I go most often, but I have found some choice finds at garage sales, resale shops, and among private collections.  The latter are usually sold by the heirs of a recently deceased person who was an avid collector.  Sometime I feel a little guilty about those purchases because they don’t know the real value of what they’re selling.  But I get over it as soon as I have the treasures in hand’! 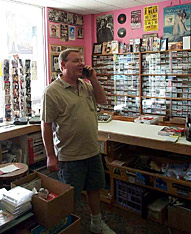 Joe Lee, the inimitable proprietor of Joe’s Record Paradise, which has relocated to new digs in Silver Spring, MD from its longtime Rockville, MD locale; likely on the horn negotiating yet another collection of rare vinyl…

I would recommend that interested persons do some research on artists or groups of interest and acquire a good basic knowledge of the particular style of music they like so that they know the value or importance of what they’ve found when they encounter it.  Crate digging is also a very fun way of learning more about the music, particularly if you take the time to read the liner notes.

Are you a dedicated Crate Digger who’d like to participate in this dialogue of magnificent obsession?  Drop a line at willard@openskyjazz.com…

This entry was posted in Crate Digging. Bookmark the permalink.