Posted on September 10, 2009 by The Independent Ear 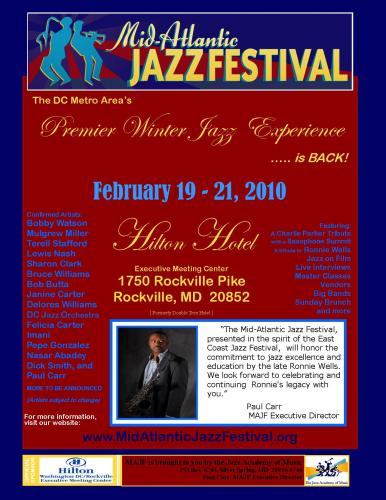 For 15 years, up until her passing on to ancestry, DC area based vocalist and vocal educator RONNIE WELLS tirelessly produced the successful mid-winter East Coast Jazz Festival at the Doubletree Hotel in Rockville, MD (suburban Washington, DC).  During that time Ronnie built an impressive and loyal audience, many of whom traveled from neighboring states and points beyond to spend the weekend bathed in a kind of 3-ring jazz circus — a loving characterization to be certain.  It can truly be said that the East Coast Jazz Festival (ECJF) fostered a jazz party atmosphere, with folks camping out at the hotel for the weekend and hosting parties in their suites and rooms, and feasting on jazz performances that commenced at lunchtime and concluded in the wee hours.  The festival was also deeply steeped in jazz education, fostering free performances by area high school jazz students, student competitions, and scholarship awards.  Ronnie, who taught privately and at the University of Maryland, also provided a showcase for her many vocal students throughout the weekend.

When Ronnie Wells passed on to ancestry in 2006 not only was her passing a great loss to the DC scene, but sadly the East Coast Jazz Festival seemed to ascend into memory with her.  When Suzan Jenkins assumed the executive director post of the Council on Arts & Humanities of Montgomery County one of her goals was to facilitate gatherings of arts activists in the county to develop new efforts for the community; renewal/resurrection of the East Coast Jazz Festival was one such opportunity.  A working committee of concerned arts professionals has come together over the last few months to launch the brand new Mid Atlantic Jazz Festival in the true spirit of the former East Coast Jazz Festival.

The first annual Mid Atlantic Jazz Festival will be produced by saxophonist Paul Carr and his spouse Karmen Carr’s burgeoning Jazz Academy of Music (www.jazzacademy.org).  JAM presents an annual summer jazz camp for high school students, many of whom come from Montgomery County.  The dates for the Mid Atlantic Jazz Festival are February 19-21, 2010 at the Hilton Hotel (approximately 15 miles north of downtown DC), the same Rockville, MD hotel which was formerly the Doubletree and host to the ECJF those 15 years.

Among the artists who will perform at the festival are Bobby Watson, Mulgrew Miller, Terrell Stafford, Lewis Nash, Marc Cary, Bruce Williams and a host of the DC area’s finest artists, including the Alto Saxophone Summit Word on Bird, a vocal tribute to Ronnie Wells, the DC Jazz Orchestra, the finest high school jazz bands in the area, nightly jam sessions, jazz-on-film, live artist interviews, and a Next Generation matinee.  Check the MAJF web site: www.MidAtlanticJazzFestival.org for details as they develop. For now SAVE-THE-DATE: February 19-21, 2010, the MID ATLANTIC JAZZ FESTIVAL is coming… at affordable prices!

Don’t sleep… The Independent Ear will have further details on the MAJF forthcoming…  Stay tuned!