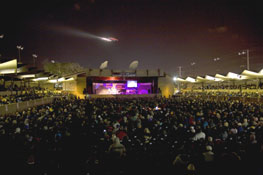 Much has been written about the reportedly dwindling jazz audience recently, including several ‘oh jazz, ‘po jazz, woe is jazz…" red flag wavings and various gnashing of teeth.  (See elsewhere in The Independent Ear one writer’s righteous indignation over Terry Teachout waving that red flag and all but planting a R.I.P. sticker on the nearest jazz artist in the Wall Street Journal.)  All kidding aside (as Jon Hendricks would say "I’m only serious") we are simply not fully developing the potential audience for this music.  Teaching a jazz course for lay people (i.e. non-music students) at Kent State University titled Jazz Imagines Africa has been quite a view into some of the reasons we are failing to maximize the audience for jazz.  Each semester never fails to reveal just how many of my students are experiencing jazz for the first time; and for a majority of them their testimony indicates that the course has opened them up to a world of music they never knew previously!  Yes, our education system shares some blame here, perhaps the many excellent jazz educators in our community could and should do more to educate the non-music student populace on this music.  But a major share of the blame must go to the musicians.

Simply put, today’s musicians could do so much more to make jazz music more audience-friendly and be more welcoming towards their audiences, and by turns more inviting of that audience’s return to future performances.  Do you really think that arriving on stage carelessly dressed, bearing aloof expressions with an overall hipper-than-thou demeanor that suggests to the audience that is they who are truly privileged that you’ve consented to come down from on high and inform them of your glorious artistry, does anything for cultivating an audience!?  I can’t count the number of times my relative novice students write about how put-off they were by jazz musicians’ attitudes at performances they’ve attended on assignment.

Do you truly think that going a complete set without saying a mumbling word to your audience does anything to make that audience feel invited, welcome, or encouraged to continue supporting jazz?  I’m afraid Miles Davis ruined it for some musicians, suggesting that they could get away without saying a word to an audience for an entire performance.  Did you forget that Miles’ voice was shot and the audience probably wouldn’t have understood a damn thing he was saying anyway, so why bother?  On the other hand, is your voice shot?  If not, then why is it so burdensome and such a seeming chore for you to offer one word of explanation to your audience about the music you’re playing, much less introduce the members of your band in a welcoming way that enables them to at least feel as though they know you better?  Are you that aloof and disdainful of your audience that you would shoot yourself in the foot — and the art form — by being so seemingly dismissive of that audience?

Case in point, a recent performance by an exceptional band that was crackling and full of energy.  The artist’s manager introduced the band with copious remarks that bordered on babbling after awhile.  OK, so now we all knew who the players were…  The music was completely original and fresh, but the leader offered no words of introduction or explanation, barely even an acknowledgement that there was an audience in the house!  Do you suppose anyone who may have witnessed this artist for the first time was overly encouraged by this lack of information or interaction?

Programming is also a major concern as far as being welcoming of and informative towards your audience and keeping your set fresh.  Does every soloist in your band need to solo on every piece?  NO…  Should every soloist be presented in the same order on every piece?  Ho-hum… only if your aim is to anesthetize your audience…  That kind of presentation glazes an audience over pretty quickly; and one suspects that boring your audience is the last thing you set out to do.  But maybe not; that same set I mentioned in the last paragraph featured the band performing in the same soloist sequence ON EVERY PIECE!  Artists please… that becomes deadly counterproductive after awhile, even for folks so seemingly immersed in the music as the small coterie of cognoscenti I sat with that evening.  As I looked around the room at the remainder of the audience however I could see a lot of eyes glazed over, a lot of quizzical looks, a lot of ‘I can’t wait until this is over’ or ‘what the hell is this’ looks.

Yes, a huge measure of the jazz audience development responsibility falls directly on the shoulders of the practitioners of this great art form… the musicians!

Anyone wishing to take up the matter of jazz audience development in any kind of extended way beyond the Comments box below is invited to do so.  Hit me back at willard@openskyjazz.com.

This entry was posted in The Tip. Bookmark the permalink.

5 Responses to The Artist’s responsibility