The following is the fifth in our series of periodic anecdotes from African Rhythms, the forthcoming as-told-to autobiography of NEA Jazz Master Randy Weston by Willard Jenkins.  (For a related piece on the upcoming Festival Gnaoua (Gnawa) scroll down to "Hu-Ta-Nay" and "Big Chief" Set to take Morocco). 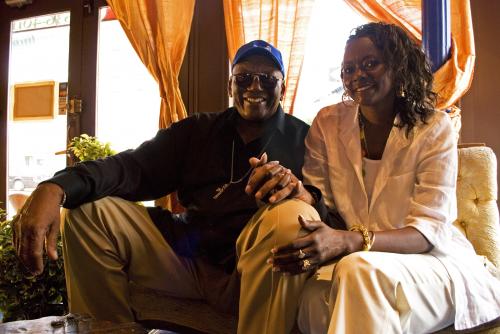 The Gnawa actually have a close kinship with African Americans; they’re our brothers and sisters.  Their ancestors came from the same region of Africa as the great majority of African American ancestors.  While our ancestors were brought to the Americas and the Caribbean aboard Atlantic slave ships on the Middle Passage, Gnawa ancestors were crossing the Sahara to North Africa in bondage.  Some of the same faces you see on the Gnawa in Morocco you see in the U.S. and you would never know the difference until they opened their mouths.  My Gnawa friend M’Barek Ben Outhman from Marrakech, who has made tours and records with me in recent times, could be a brother from Brooklyn, could be from Cleveland… until he starts to speak.  The physical characteristics of African Americans and the Gnawa are very close.

I once met a Congolese filmmaker named Balufu Bakupa Kanyinda who insisted that the Gnawa story is the most important story in Africa to have been revealed to the rest of the world in the 20th century.  I asked him "what do you know about Gnawa, you’re from the Congo"?  He said "man, let me tell you, the story of the Gnawa migration to Morocco proves that black institutions, black civilizations were so powerful that even if we were taken away from our homeland, taken away as slaves, we created new civilizations."  That was also quite an interesting observation to me because when I first came to Morocco the Gnawa were viewed as street beggars, undesirables.  Moroccans initially tried to discourage me from having anything to do with Gnawa.  They’d ask me ‘what do you see in these people?’  Everywhere you go the black folks are always on the bottom.  But now the Moroccans are all touched by Gnawa; all the young, educated Moroccans are all influenced by Gnawa culture… black culture.  They’ve now seen the importance of Gnawa traditions to overall Moroccan culture.

The way I met the Gnawa is in retrospect one of the many mysteries of life I’ve encountered along the way.  In 1968 my trio, with Ed Blackwell [drums] and Bill [Vishnu] Wood [bass], played a small performance at the American school [in Tangier, Morocco] where my children Pam and Niles attended.  I met one of the teachers there, a man whose name I forgot almost as quickly as I learned it and that’s where the mystery begins.  I only saw this man once after this initial encounter, yet he was very important as far as my introduction to Gnawa culture.  That day after our performance at the school this teacher came up to me, introduced himself, and said ‘Mr. Weston, I’ve heard you’re interested in traditional music.  You haven’t heard African music until you’ve heard the Gnawa.’  Needless to say he certainly got my attention with that comment.

I told him yes, I was certainly interested in knowing more about these Gnawa people.  We arranged a time when he could come to my apartment and when he arrived he brought one of the Gnawa with him, Abdullah el-Gourde, who played the guimbre.  Abdullah and I have been connected ever since; he was the one who really introduced me to Gnawa culture and customs.  As for that mysterious teacher, neither Abdullah not I ever saw this man again, and neither of us can remember his name!

At the time Abdullah worked for Voice of America radio in Tangier.  I’m not quite sure what he did there but he worked there for a long time and it was great because it gave him the opportunity to learn to speak English and learn something about American people.  He told me about the Gnawa and their lineage, their culture, and he would often mention their spiritual ceremonies which they call Lilas [lee-lah].  I became particularly intrigued by what little he told me of these Lilas and I really wanted to attend one purely to observe.  But at that time it was strictly taboo for so-called outsiders to attend these spiritual ceremonies, it was that deep.  But I was persistent and kept insisting that my only interest was as an observer, not as a participant.  Finally they relented and enabled me to attend a Lila.

The Gnawa have a color chart and each of their songs has a corresponding color [editor’s note: the Gnawa color chart is being reproduced in the forthcoming book African Rhythms].  They have different rhythms for every color and each color represents a certain saint, a certain spirit and they consider some colors more dangerous than others. 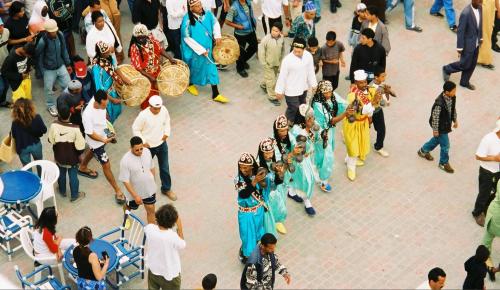 I remember very vividly an incident a friend told me about later regarding these colors.  My partner in Morocco, Absalom, told me a story about an encounter his wife Khadija had with Gnawa.  He said that what happens in Morocco, three days before the Muslim holy period of Ramadan, people with large houses give their homes over to the Gnawa so they can have their ceremonies, where they do their spiritual thing.  Absalom said that a long time ago this Gnawa man was in a trance and he was dancing to the music and spinning around and whatever the color was it was a very heavy color.  So whatever this guy was dancing to Absalom’s wife and little girl started laughing at this spectacle and the result was that his wife responds to the color yellow because of this incident!

On another occasion after this yellow incident I was with Absalom and his wife, and the Gnawa were playing at my house.  There was another Moroccan guy there, a would-be flute player who had pulled out his instrument itching to play with the Gnawa.  This cat with the flute is one of those types of guys who have no talent, but he’d even go so far as to have the nerve to take out his flute and start playing if John Coltrane was onstage!  I warned him ‘man, don’t play that flute!’  So Absalom asks the Gnawa to play the color yellow for his wife Khadija, who was reclining on the couch nearby.  When the Gnawa played the color yellow all of a sudden a strange voice started coming out of Khadija, who is a very dainty woman.  This voice starts coming out of her and she says something to this wannabe flute player in Arabic.  Next thing I knew this cat grabbed his flute and started dashing for the door.  Whatever she said it was so powerful he had to split immediately!

One Response to African Rhythms anecdote #5: Tales of Randy Weston