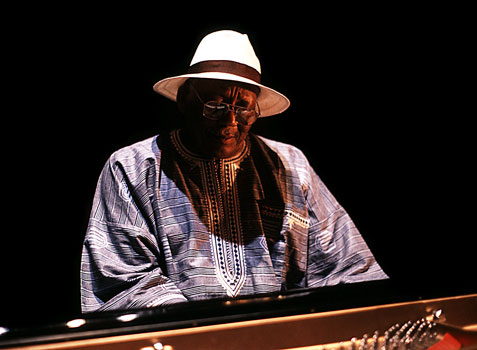 The fourth in our ongoing series of anecdotes from the forthcoming book African Rhythms, our as-told-to autobiography of Randy Weston, takes us back to the dawn of the 1950s when Randy was a green 23-year old asipiring piano player on tour with the old blues singer Bull Moose Jackson.

This tour was a really big deal for me because other than the service it was not only my first time leaving home, but also my first time going down south on the blues circuit.  The pay was $25 a day, which sounded like a lot of money at first — remember, this was 1949.  Out of that $25 you had to pay your room rent and buy your meals; but for me I was still living at home and this sounded like a golden opportunity to travel.  It was the same for [drummer] Connie Kay and he and I quickly became tight friends.  We were similar in height and worked great together on the bandstand as a rhythm section, overcoming the bass player’s obvious shortcomings.

The tour started in the fall and one of our first memorable gigs was in Washington, DC.  This was during a period when battles of the bands were quite common and very popular.  In DC the battle was Bullmoose Jackson versus Ruth Brown’s band, which had Willis "Gatortail" Jackson on sax.  Willis was like [Bull Moose’s strawboss] Frank "Floorshow" Cully, one of those entertaining bar walkers who would hold that one continuous note while removing his clothes and stuff like that.  But Willis Jackson was a better saxophone player than Floorshow, who was just one of those guerillas, all show and bluster, little substance.  The first time I saw those cats lying down on the floor battling, playing one note and meanwhile taking off their shirts and ties was something I had never seen before and it was pretty corny to me.  But the audience ate it up!  This was some real black showbiz of the day.  Ruth’s band probably won that battle because Bull Moose was more of a crooner, with a sweet and tender voice, a very romantic kind of singing, not exactly a hardcore blues shouter or a dynamic crowd-pleaser like Ruth.  Bull Moose sang the blues all right, but Ruth and Willis were more dynamic performers.

We played the whole black circuit on this tour, from the Eastern Seaboard down to Ft. Lauderdale, Florida and over to Mobile, Alabama, New Orleans, Houston, and Oklahoma City; those were the stops that stood out in my mind.  I also remember playing in places in North Carolina where there was hay on the floor with folks dancing on the hay.  We played in joints where the piano had maybe two working octaves and the bandstand was so tiny that the piano couldn’t fit onstage and I’d have to sit in the audience to play.  But it was a learning experience and we quickly learned that although that $25 a day sounded like great pay in the beginning to a young inexperienced guy like me, after we paid for our rooms and our meals we had hardly any money left.  Floorshow was also an incurable gambler who would take our payroll and gamble with it, leaving us short sometimes.  So we never had any real money.

This was way before civil rights so we were staying in all-black  hotels.  Another memorable gig was in Mobile, Alabama where we played in a place that had never had a black band before.  When we arrived there was a state trooper posted outside this ballroom where we were to play.  Floorshow’s advance publicity photo had preceded the band and it pictured him with his saxophone up in the air; he fancied himself as an acrobat of the sax and he would often jump in the air while holding that one note.  The state trooper at the door asked us "which one of you guys is this guy" pointing at the photo.  We all said "that’s Floorshow" because he was a real pain in the ass that was always making us crazy so we wanted to get even.  The trooper looked hard and said "we better see you do this tonight" pointing straight at Floorshow, "or we’ll take your ass to prison!"  Welcome to Mobile!  Right away we knew this could be a hot night in Alabama.

We got to the gig and right at the start of the show Bull Moose is singing these syrupy romantic ballads and his usual blues.  All of a sudden these overly excited white women started rushing the stage — and remember, this is Ku Klux Klan country!  Needless to say this shook us up and we kept trying to tell Bull Moose to change the tempo, change the songs, or do something to lower that heat!  There were actually women sitting on top of the piano!  Thankfully nothing happened but we did a whole lot of sweating that night, and it wasn’t from the room temperature.

One Response to African Rhythms anecdote #4