Have you heard Evan Christopher?

Once you get past the outsized ego of its leader, trumpeter Irvin Mayfield, the burgeoning New Orleans Jazz Orchestra is potentially an exceptional representation of both the modern and traditional jazz fruits of the city.  The orchestra, or NOJO as it is known, boasts such gifted players as saxophonists Ed Peterson and Derek Douget, trombonist Ron Westray, and the sturdy rhythm section of pianist Victor Atkins, bassist David Pulphus, and drummer Adonis Rose, versatile modernists steeped in the New Orleans traditions to be sure.  Admit it, you may not have heard of these guys given the fact that unfortunately jazz musicians who choose to live outside the media centers often suffer in undue obscurity.

During the roughly 14 months in ’07/’08 that I spent living in New Orleans the "local" artists and music were a constant delight and discovery.  For what is essentially a medium sized city with a peerless major metropolis culture, the number of world class musicians who live and work there per capita is staggering.  During my time there catching sets at Snug Harbor, Tipitina’s, Ray’s Boom Boom Room and assorted other joints both Uptown and below Canal Street, and being privileged to host programs over mighty WWOZ, one of the most impressive musicians I heard is perhaps the revelation of NOJO, the clarinetist-saxophonist Evan Christopher.  This brilliant musician manages a keen ear for both trad and modern jazz — versed in Django and Ornette — and plays both with brisk authority.  If you haven’t heard him, all I can say is DON’T SLEEP!

Good friend and intrepid Twin Cities writer Pamela Espeland caught up with Evan Christopher recently for a conversation; here’s part one of that encounter.  Oh, and one more shout out to the Crescent City: WHO ‘DAT?!

Talking with Evan Christopher (part one)

Think "clarinet" and "New Orleans" and a certain sound may come to mind: sweet, quavery, old-timey Dixieland.  I once thought of the clarinet as an instrument that had seen its day in jazz, making rare appearances for color and nostalgia.  And then I heard Evan Christopher play (www.clarinetroad.net). 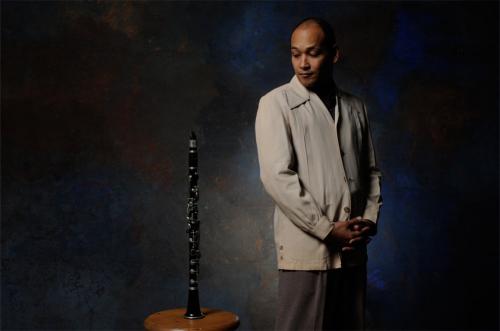 During my first encounter with the Creole-style clarinetist, an impromptu set at the Dakota Jazz Club (www.dakotacooks.com) in Minneapolis in 2008, he stole the show from Irvin Mayfield, who usually keeps a pretty firm grasp on such things.  I heard Christopher again at Chickie Wah Wah in New Orleans in March ’09, where he has a regular gig on Monday nights, and back at the Dakota in October, where he played for more than two hours to a packed house with no break.  Each time I came away knowing I had heard something old and something new.

Born in Long Beach, CA Christopher began playing clarinet at age 11.  He moved to New Orleans in 1994 and left twice, the first time in ’96 to join the Jim Cullum Jazz Band in San Antonio, where he remained for two and a half years, and again in ’05 after Hurricane Katrina, when his Broadmoor neighborhood flooded and he became one of the city’s more than 4,000 displaced musicians.

At the invitation of the French government, Christopher relocated to Paris, where he deepened his commitment to the music of New Orleans, solidified his claim to the title "Ambassador of the Clarinet," and formed two groups: The Jazz Traditions Project and Django a la Creole.  He returned to New Orleans in December ’07.

Christopher is charismatic on stage, playing with passion and joy, connecting with the audience, occasionally singing, sometimes dancing as he plays.  Rooted in history and scholarship, his music is modern and fresh, sincere and full of emotion, respectful of the elders but not at all dusty or quaint.  Contemporary trad?  Or simply the living, breathing, right-now sound of New Orleans?

We spoke in late ’09, when Christopher was in Minneapolis with pianist Henry Butler, and also to meet with the Minnesota Orchestra, which has commissioned him to write a new piece for orchestra that will have its world premiere on July 23, 2010.

When I first met Tony Scott, the great bebop clarinet player, he was living in Italy.  I was on tour and he autographed a poster-size picture he used to carry copies of around, of himself backstage at Carnegie Hall in 1953 or 1954 with Billie Holiday and Charlie Parker.  He signed it "Good luck on Clarinet Road, lots of curves."  I lost that poster in the storm but I kept the Clarinet Road thing.

[Editor’s note: in yet another of their localisms New Orleanians rarely refer to their August 2005 calamity as "Hurricane Katrina" or "Katrina", but simply as "the storm."]

How did your music change when you moved to Paris after Katrina?

When I went to Paris, I was very aggresively trying to move forward, trying not to cry over spilled milk.  Initially, I thought there was no way I was ever going to go back to New Orleans, I was so pissed off about it.  I envisioned getting a project started in Paris, and I envisioned staying there.  To shape that project, I had to come up with a slightly new aesthetic, because I had to find a way to represent New Orleans music outside of New Orleans, with musicians who weren’t living there or from there.

You were working with French musicians?

On the Live at the Meridien recording, the drummer is French.  The other two musicians live in France but they’re actually Australian.  The bass player, Sebastien Girardot, has played traditional jazz with real New Orleans-style revival bands since he was 19.  [Guitarist] David Blenkhorn came up with Australian musicians in the Australian traditional jazz scene.  He plays the shit out of blues.  He approaches jazz in almost a more American way than a lot of American musicians do.

What does that mean?

He likes to swing and play blues.

Do you find there’s a difference between working with American musicians and those who aren’t American?

I can’t make a generalization like that.  But I will say that I enjoy the spirit of these guys.  It seems more American to me than a lot of the cats I work with here.

Talk about your Jazz Traditions Project, the group with whom you recorded Live at the Meridien.

It’s a tongue-in-cheek thing.  A lot of avant-garde/contemporary groups use the word "project" and it’s sort of annoying.  The Jazz Traditions Project is a way of saying "We’re not going to apologize for having a foot in the door or New Orleans music."

I met Sebastien when he was about 19 years old, at a festival in Norway.  He was playing with an Australian band, good revival-style New Orleans jazz.  The drummer, Guillaume [Nouaux], I met a couple years later in Paris.  David Blenkhorn I met in Ascona, Switzerland.  He was there at a festival with a great Australian jazz musician named Tom Baker, who embodies what I think is more the American spirit/aesthetic of jazz better than a lot of American musicians.

You taught for a time.

That is so bizarre!

Everybody says that, and I want people to have that reaction.  But maybe it’s not so bizarre.  If you think about what has become the norm for modern jazz pedagogy, New Orleans strategies and schema for music-making or learning music don’t really fit in.  I found ways to make them fit in, but they don’t generally.  It’s not people’s experience who teach on that level.  It’s not something, except in New Orleans, that students can engage in directly when they walk out their door.  The fact that they choose not to is the part that I want to seem strange.

When you are bringing the music forward, making the music contemporary, how are you doing that?  What’s going through your mind as you’re preparing and performing?

During my preparation with the band, I have some rules in my head, to intentionally avoid repertory. The idea behind Django a la Creole was if we do these Django tunes, we have to find a new way to do them.  We have to find elements in them that say that they want to be something else.  We have to find rhythmic elements, harmonic things, that make them actually want to not be the same thing that they’ve been for years and years, that everybody else is doing.

With the Jazz Traditions Project, it’s the same thing.  You have to take vehicles that lend themselves to using the vocabulary that’s rooted in tradition.  A song like John Coltrane’s "After the Rain" is a beautiful waltz.  You imagine, well, what if Elvin Jones is playing in a brass band, what if [clarinetist] George Lewis is playing the melody?  And it’s not to make anachronisms.  It’s like a postmodern strategy, where you’re blurring the lines between genre, where you’re blurring the lines between tradition.  At the same time, it still has to be musical, to have what I would call narrative.

[See and hear the Jazz Traditions Project perform Coltrane’s "After the Rain": www.youtube.com?v=SCSeiAWZzSM]

It’s hard finding things.  I’ve been looking for other Ornette tunes, and I’ve hung out with him.  He’s a lovely cat.  He appreciates things that sound good.  His whole thing has always been about being free of all those trappings — what’s traditional, what’s modern, freedom from tonality, even more abstractly, freedom from what he calls our "classness," or even gender.  He’d rather be free of all of that.

What were you doing before you started playing in the New Orleans style?

Doesn’t everybody have that Art Blakey dream?

I don’t know if it was specifically Art Blakey.  I was kind of making a joke.  Those kinds of stories resonate with one’s imagination when you’re out there in California.  A couple of my mentors were modern musicians.  I think that’s what I envisioned myself being.  I still know a lot of that music, even though I never get to play it.

One Response to Have you heard Evan Christopher?